A DISCUSSION ABOUT BIOCONTROL IN OUTDOOR CROPPING SYSTEMS WITH CHRISSIE DAVIS, OF KOPPERT

← Digital Integrated Pest Management: A Conversation with Farm Dog's Founder and CEO “The lack of incentives for adopting IPM is probably the strongest barrier” - Surendra Dara of the UC Cooperative Extension →

I had a very interesting conversation with Chrissie Davis, the national account manager of Koppert USA’s outdoor agriculture team. Koppert Biological Systems is the worldwide leader producing beneficial organisms, microbials, macro-organisms, and pollinators. She has been working there for 17 years now,and after getting her start in the ornamental market in greenhouse, Chrissie now concentrates on berries and also covers tree crops, vineyards and watermelons.

We talked about biocontrol and some misconceptions about it, about the history, opportunities, and challenges of its implementation in open fields, and about the new drone-based technologies used to release beneficial agents.

Misconceptions about biocontrol and little-known benefits

Contrary to certain misconceptions that still exist, biocontrol is not only for organic growers. As long as they make sure to only use compatible insecticides as part of their integrated pest management (IPM) program, conventional growers can also benefit from biocontrol. “80% of our customers are actually conventionally growing and just looking for alternatives to how they do their day to day pest management practice, and biocontrol is an ideal solution for them,” Chrissie explains. 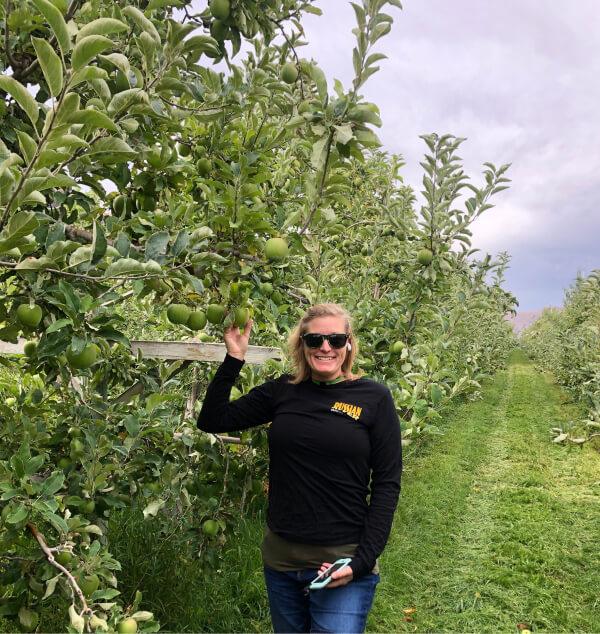 Biocontrol has some advantages over the use of synthetic pesticides, and she highlighted a few interesting benefits for growers that go beyond the more widely known benefits addressing environmental sustainability and health concerns.

“A pesticide is really only as good as the spray and as good as your coverage and it can be difficult to get good coverage if you have a dense plant canopy or for example, in a strawberry, you have a very tough leaf so it’s very difficult to get the synthetic insecticide under those leaves.” But biocontrol doesn’t face the same constraint: “The natural enemies are hunters and are really efficient at attacking the pest because they are moving and navigating throughout the plant canopy hunting and finding their prey and really controlling them as nature intended”

Some operational advantages of using biocontrol can also lead to higher profit for the growers. As Chrissie explains,  “During the peak times of strawberries production, the blocks are harvested every day or every other day. But because of the three-day re-entry interval or post-harvest interval after certain miticide applications that prohibit growers from harvesting, you would lose the yield by letting that fruit hang on the plant. You don’t have this issue with beneficials“

The growing prospects of biocontrol for outdoor crops

Biocontrol in outdoor crops already has a long history in the United States and other parts of the world: the famous case of “classic biocontrol” in the California citrus industry dates back to the 19th century, when the vedalia beetle was brought from Australia to help combat the cottony cushion scale. Even the contemporary augmented biocontrol techniques, such as the release of predaceous mites on California strawberries, started in the 1980s when Koppert began bringing in natural enemies.

Biocontrol has a longer history of implementation in greenhouses, and implementing it in open fields brings a different set of challenges, but it has a proven record for improving the bottom lines of farmers’ who invest the time to build a solid plan.

“The first step to success for the use of biocontrol in open fields is to have a comprehensive understanding of the outdoor cropping system you are working with: growers need to consider if it is an annual or a perennial crop, look at the crop variety, understand what the key pests are, some  of the cultural practices, making sure they’re monitoring pests and collecting accurate information.“

It is also very common for growers to still use pesticides along with beneficials as part of their IPM strategy, but Chrissie reminds us that,  “as a grower, you have to make sure that you use pesticides that will not harm the beneficials and come to a working collaboration with them. The first thing you need to know is whether the synthetic pesticide is a selective or broad-spectrum one. Koppert has created a side effects guide that helps you see if the pesticide you want to use is compatible with the biologicals that you’ve introduced into your crops.“

The return on investment of biocontrol

Thanks to the existing protocols in annual crops, growers can expect to see a return on investment beginning in the first season. In strawberries, for example, as long as applications of predaceous mites are timed so they establish and control the pest, growers are able to immediately see the reduction in their need for pesticides.

Chrissie explains that, “On average, a grower using a conventional pest control program to control two-spotted spider mites will need to apply six to eight miticides through an eight-month crop. With the introduction of predaceous mites at an early time frame, the growers will only spray once or twice during the entire season on average, or may not even need to apply a single miticide, even in conventionals!“

Many vegetable growers who are trying to reduce their costs and make their pest control programs more efficient are also users of beneficial insects. Chrissie uses one of her current growers as a good example: “On average, in the six-month vegetable crop, the grower was applying anywhere from 15 to 18 broad-spectrum insecticides. By using Swirskii mites and Orius, some beneficials that attack thrips, we’ve been able to reduce it to three sprays annually.”

Perennial crop growers might take longer to see a return of investment, however, “In fruit orchards, for example, growers are dealing with a multitude of beneficials and pests that have been breeding and growing for quite some time”. Growers first need to understand what has been done in the past, making sure there are accurate records, what’s been sprayed and look for potential infestations in neighboring orchards. “If you plan on implementing augmented biocontrol, you need to make sure that you’re going to be able to establish it for a multiyear approach if you want it to be successful.“

Drones bring new opportunities for the implementation of biocontrol

To answer some of the remaining challenges of the implementation of biocontrol in outdoor cropping systems, Koppert has developed a system mounted on a drone which releases beneficial insects a few feet above the crop (Disclaimer: the service has been launched in the United States in partnership with UAV-IQ). This new technology allows extremely uniform applications of the natural enemies over the fields which results in better establishment than from manual release.

“Before we jumped into our first commercial season, we did three years of testing to make sure we have efficiencies in how we applied, we looked at the different flight patterns for the different species of beneficials for instance“,  comments Chrissie. “We’ve been extremely successful in our first season, especially applying predaceous mites in the strawberries. All of our growers who have requested to release the beneficials using drones were extremely happy and they’re repeating their applications this year.“ 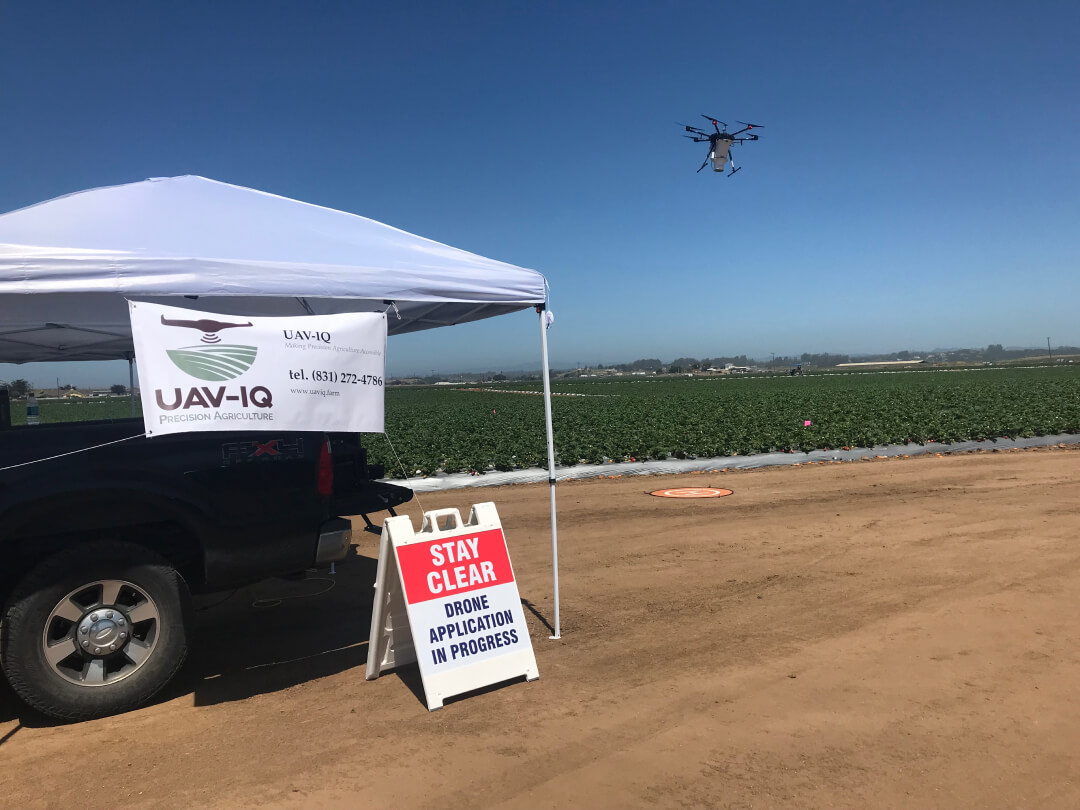 Release of predatory mites by drone in a strawberry field

Several reasons explain this success: the drone was extremely effective releasing beneficial insects in fields that were otherwise not accessible with a spraying tractor or even by foot because of the mud caused by the rain last year in California. Obstacles in the middle of the field, such as the sprinkler pipes that run the length of the beds, also make it hard for field workers to release beneficials by hand at a uniform rate, while the drone can do the application easily from the air. This technology also comes in handy with very steep terrain where it’s difficult for humans to walk.

One of the key advantages of drones in areas of the world with labor shortage is to be able to apply beneficials even when there isn’t a large team of field workers available. In her experience while at Koppert, “We’ve had the example of a grower managing 500 acres over multiple ranches but who only has his crew available for one ranch at a time so he has to move his employees from ranch to ranch. But the reality is, there will be windy conditions in the afternoon which is not ideal to release biologicals so it might take a few days to have your labor force apply to several different fields. With the drone, you could actually have multiple drones and you only need one pilot in each ranch, so you could get all three of them done in the same amount of time.“

Chrissie believes that this type of technology will accelerate the adoption of biocontrol. “Once growers will realize that implementing biocontrol is equal, if not faster, compared to having to do six miticides spray, thanks to drone technologies, they will adopt it at a much faster rate. It will also help to move into more complex systems such as fruit orchards, nuts groves and vineyards and that’s really exciting. From the development of new protocols to the release itself, working with 40 feet high walnut trees will require different approaches!”

Getting started with the implementation of an integrated pest management strategy

As can be the case when adopting any new practice, implementing an integrated pest management strategy for the first time can be seen as a daunting task. But it doesn’t have to be overwhelming according to Chrissie, even though a change in mindset is necessary. She recommends looking at the farm more holistically, using a multiyear approach and having a clear farm plan in place before the pests start to establish themselves. Several things can be done to be prepared ahead of time: optimize planting times, know what varieties are more sensitive than others, make irrigation more efficient, check for fungicides or insecticides compatibility with the natural enemies to name a few. Growers need to create a strategy for how they are going to bring in beneficial organisms.

A good IPM program usually takes a preventative rather than curative approach to maximize the chances of success. “Trying to start using biocontrol only as a curative tool, when you already have an extreme spider mite population or a heavy whitefly population with sooty mold on your plants, for example, is really not the best scenario if you’re trying to be budget-conscious. Every season we are meeting with our growers to develop a month by month plan and make sure that beneficials are used in a preventive rather than curative manner, which helps with the overall budget.“

As a closing comment, Chrissie Davis encourages growers to get help from experts: “It is important to get multiple sources of information: advice from your nutrition experts, but also from the local county specialists that are going to be familiar with your growing area.”

Chrissie and her Koppert Biological Systems IPM team are available to assist growers and are always interested in collaborating with them to develop new protocols for different crops and pests. 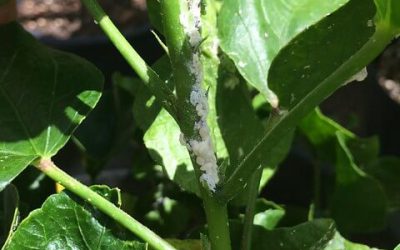 As School Starts Up, Here’s a Quick Refresher on Economic Threshold Levels