AS SCHOOL STARTS UP, HERE’S A QUICK REFRESHER ON ECONOMIC THRESHOLD LEVELS

As we discussed in our previous article, Economic Threshold Levels (ETLs) are tools which are used to determine optimal action points for spending money on pest management treatment. They are designed so growers: a) don’t spend more money treating a pest than they gain by preventing the damage they would cause, and b) avoid waiting until the damage the pest causes is greater than the cost of treating them.

EIL is the basis for calculating ETL

If properly calculated, taking action at an ETL will keep a population right below the EIL, so calculating an EIL is critical for implementing an integrated pest management (IPM) plan. Calculating one seems like it should be relatively straight forward as the formula doesn’t require an advanced economics degree to decipher; EIL = C/VD’K where C is the cost of the treatment per management unit (i.e., per plant, per acre, etc.), V is the value earned by each management unit, D’ is the percent yield loss per pest, and K is the proportional reduction in injury from treatment.

Put simply, it would seem that all you really need to know are the answers to these questions: how much does it cost to treat an acre, at what level will the population be after treatment, what is the economic value of the yield per acre, and what is the yield loss per acre caused by different levels of pest populations? In fact, most middle schoolers can work their way through this equation if given the variables.

However, there’s a reason (perhaps more than one) why middle school math teachers rarely use integrated pest management word problems in their assignments. That could be because the variables are often not straightforward and it takes experience and judgment to determine how complex one should make the solution.

For example, what is the risk of a pest becoming a disease vector? Does the formula need to be adjusted for different parts of the season since, for example, the same number of pests can create significant injury during flowering and less so during fruit set? Did the pest scouting take sufficiently long so that the pest population estimate needs to be adjusted upwards to account for the pest’s growth rate during the time required to inspect the fields? Are there new pest management technologies to evaluate?

As one can see, the simple algebra problem required to calculate an EIL can quickly grow into a complex equation that provides a constantly moving and elusive answer. The good news is that there are many growers and academics who are capable of tackling this complexity and building customized EILs, however, the optimal level of complexity is largely determined by the availability of information that can be fed into the equation as well as the perceived value of having a more accurate answer. 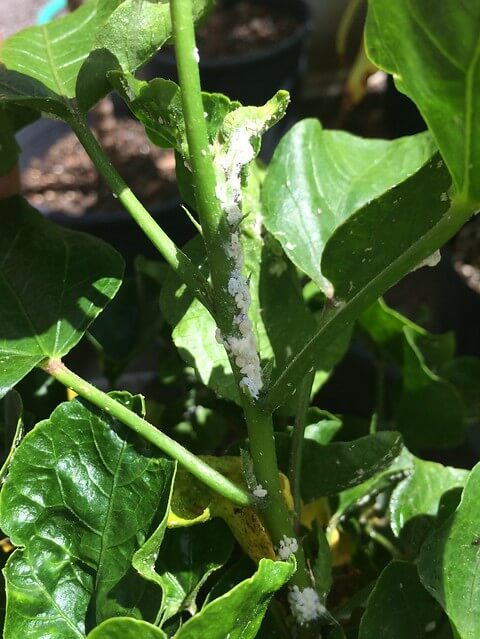 Mealybugs on young citrus stem. Do you know how to calculate the Economic Threshold Levels (ETLs) before taking action? (Source)

Because there is a wide acceptance of the fact that ETLs are good decision-making tools but they are designed for growers who have wide ranges in tolerance for complexity, a wide range of ETLs have been developed. To wrap our arms around them all, they can be initially categorized as either objective or subjective thresholds.

Subjective ETLs, also referred to as nominal threshold levels, allow growers to avoid the math test altogether and are based upon experience and gut feel. Growers are at least assessing pest levels and using static cost-benefit analysis, so they’re better than nothing, but they leave plenty of room for improvement by using objective ETLs.

There is a tradeoff between accuracy, which generally infers complexity, and ease of implementing these tools, so multiple categories of objective ETLs have been developed. Moving from low complexity/easy implementation to high complexity/difficult implementation, we will discuss Fixed ETLs and Descriptive ETLs.

Not surprisingly, the most simple kind, fixed ETLs, are the most common. They are often defined as a percentage of the EIL – i.e., action is prescribed when a pest population reaches 80% or 90% of the EIL. The specific percentages can change, but they are fixed to static EILs that usually don’t account for variability in population growth rates or injury levels. These ETLs often are conservative, potentially resulting in early treatment and overspending.

These models are reliant upon population trends and mortality rates as well as injury estimates, so it is important to have an understanding of what the confidence level of a descriptive ETL is. One potential pitfall can occur if calculations based upon early sampling show that the population is not forecasted to cross the EIL and growers become complacent. Regular monitoring should still be implemented to ensure that theory does not trump reality and that unanticipated factors can still be accounted for.

Descriptive ETLs can be further subdivided into two categories, the first of which are stochastic models that rely on average population dynamics and an associated probability of error. The benefit is that basic pest counting data can feed these models. One downside is that since they are based on averages that incorporate exponential growth across multiple generations, and exponential curves can have very steep sections, pests that have short generation times will require short intervals between sampling or an ETL can be crossed between inspections.

A second potential shortcoming is that data that is used to calculate these averages may include data that are not germain to an individual field. For example, the average may have used data from fields that are significantly hotter or colder than the field in question.

The second subcategory are deterministic models, which strive for unique, fixed outcomes based on additional, more specific data, instead of relying upon models that lump all of the parameters into a single equation and average them together. Examples of the additional data would be age-specific information of the pests, requiring more detailed inspections, and weather forecasts, which require additional data sources. These models can be considered to better customized for specific fields since the key drivers of the model are individually identified.

This additional level of complexity is justified when the resulting level of accuracy is needed, such as in IPM treatments which take a while to take effect. Thus, deterministic models are particularly important for biological control. While biocontrol treatments are proven to be highly effective components of sustainable IPM practices, they can require longer periods of time before they take effect, allowing populations to grow in the interim.

To calculate an ETL for biocontrol, the model should be driven by life table data for both the predator and pest species, and account for temperature, time and location-specific dynamics.

What are your personal preferences for complex, highly customizable models vs simple, easier to implement models? For growers with a wider range of operations, do your preferences change for certain crops, or organic vs conventional fields?